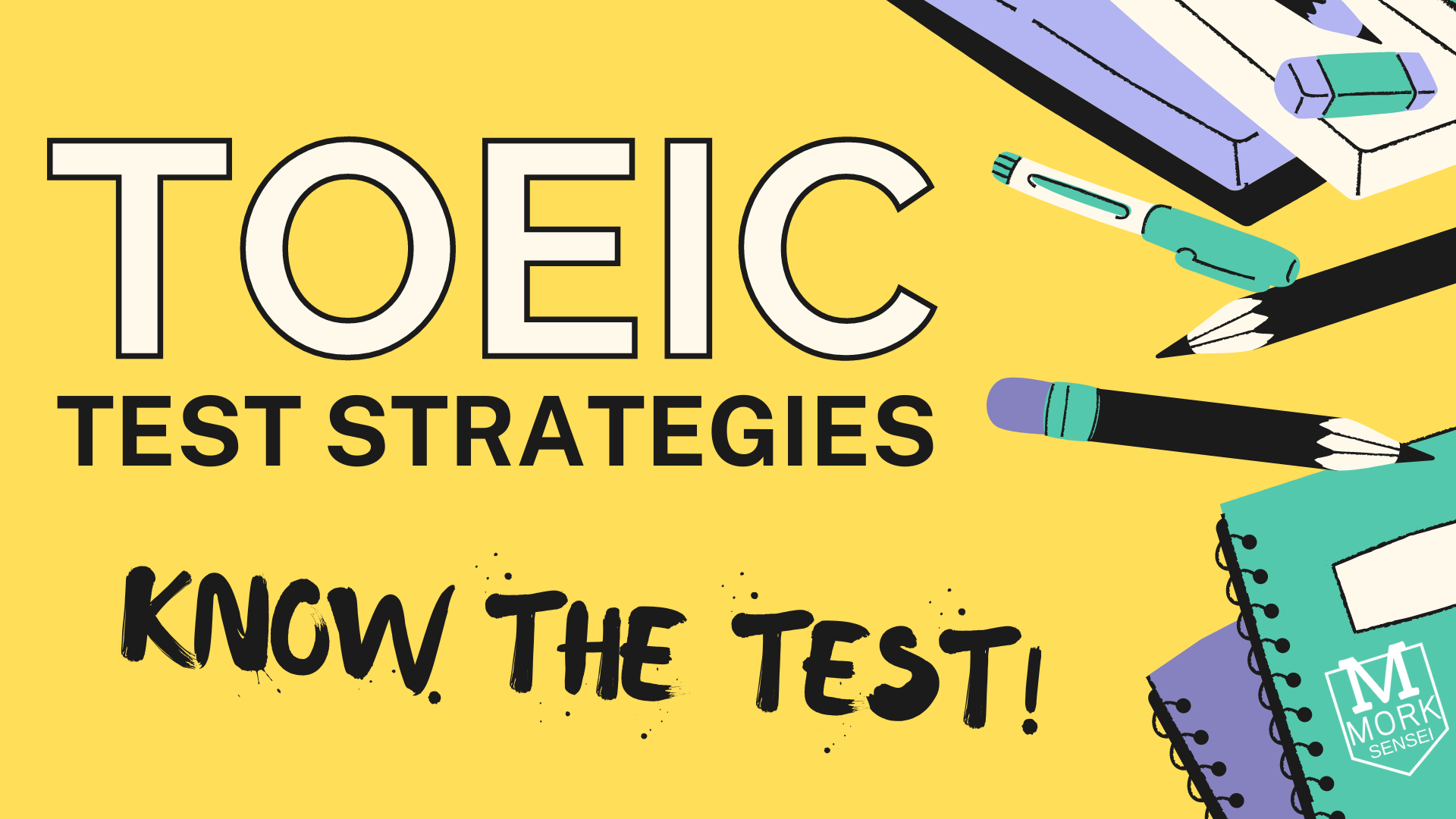 This post is the first of a series on strategies for taking the TOEIC exam. I won’t be teaching you any specific English language skills, but instead, I’ll give you some tips for how to prepare, study, and practice for the actual test. While this series is specifically for the TOEIC, it might also be useful for other English language proficiency exams, too. So, if you’re planning to take a different test, consider reading these posts, too. Let’s start right away then, with my first tip, which is to know the test – the background, the goals, and the structure, for example.

TOEIC stands for the Test of English for International Communication. The Educational Testing Service, or ETS, is the organization that writes and runs the test. TOEIC is a North American business English exam, but developed primarily in Japan in the 1970s, and it is still a very popular English proficiency test in this country. The purpose of the test is to measure the ability of candidates (or test-takers) to communicate in everyday situations in an English-speaking international working environment.

That’s a key point to keep in mind about the test – it’s for an “English as a Second Language” rather than an “English as a Foreign Language” context. This is why the test appears difficult for English learners who live in a place where English is not spoken very much, but easy – sometimes very easy –  for learners who have lived one or two years in an English-speaking environment on their own.

TOEIC has existed for many years – over 30 in fact. Now there are online formats as well and TOEIC test scores are used by over 10,000 companies, government agencies, and English language learning programs in 120 countries. Several million TOEIC tests are taken in year, with well over one million in Japan alone. TOEIC results are valid for two years, but if a required or desired score is not achieved, the test can be re-taken in as little as one month later to try to get a better score.

The TOEIC has two parts: the Listening & Reading Test, and the Speaking & Writing Test. They’re designed to complement each other, but you don’t necessarily have to take both. The questions from both are taken from common business and work scenarios, such as sales and marketing, meetings, making appointments, socialising, and business travel.

The TOEIC Listening & Reading Test is a paper-based receptive skills test, and takes around 2 hours and 30 minutes to complete – 2 hours for the test and another 30 minutes to answer some questions about yourself. There are popular shorter versions of this test for institutions without the final 30 minute-section.

Now, because the test questions are all multiple-choice and because listening and reading are what are called receptive language skills, this test will be more about recognition than recall. I explained the difference between recognition and recall in another video if you’re not sure about the meaning. Basically, recall tests your ability to bring up something from memory and is a better way to test if you really understand something and can produce it. However, the test is much less expensive if it uses tactics like multiple choice, which is more for recognition. Just keep that in mind. The TOEIC listening and reading test can be easily set up for classes and graded quickly and easily with relatively fast results. Yes, this makes it cheaper and therefore more popular.

The listening section is 45 minutes long. There are 100 questions in total, taken in 4 sections. Multiple choice, by the way, just means you have to choose from some possible answers – in this case of the TOEIC, it is usually 4, but sometimes just 3. The listening section included listening texts. They start simple, and gradually become more and more difficult. The first section includes photograph prompts. Next, there are question-response dialogues, a third section including conversations, and finally, short talks. In the last two sections, there are several questions for each conversation or talk.

The reading section of the test is 75 minutes long. There are a total of 100 multiple-choice questions here as well. The questions include a mix of gapfills, paragraph completion, and reading comprehension types. As with the listening section, the questions get progressively (or gradually) more difficult as you work through the test. There are longer passages with many questions for each test closer to the end.

The TOEIC Reading and Listening Test gives a score between 10 and 990. Here is a list of what the scores mean:

OK, now let’s move onto the TOEIC Speaking and Writing test. This test evaluates your productive skills and must be taken online at an official test centre, so it might not be as convenient for many people to take. Your answers are digitally recorded and then sent to ETS for marking.

The writing section is 60 minutes long. There are a total of 8 questions. For the first 5 questions, you must write sentences about pictures, following specific instructions or guidelines. You have to write responses to emails for questions 6 and 7, and the final task is to write a short opinion piece of about 300 words. Just like the speaking section, the reading section gets more difficult as you go through the test, and the end of the section is worth more points. Questions 1 to 5 (the first task type) is rated on a scale of 0 to 3, questions 6 and 7 (the second task type) are scored from 0 to 4, and the last task – question 8 – is from 0 to 5. Again, the sum of all the scores is then converted to an overall score of 0 to 200.

OK, so now you know a little background about TOEIC. You know about the two separate tests, their different sections, and scoring. If you’ve already taken a version of the TOEIC once or twice before, it will look familiar to you, but if you’ve never taken it before and this video is confusing, don’t worry. By doing model or practice tests, you’ll become very familiar with the TOEIC anyway. Most practice books you can get on the market have some explanations about the test at the start of the book, too. If you practice enough, the structure of the test will gradually become “second nature” to you (or natural to you) before you attempt (or try) the real thing.