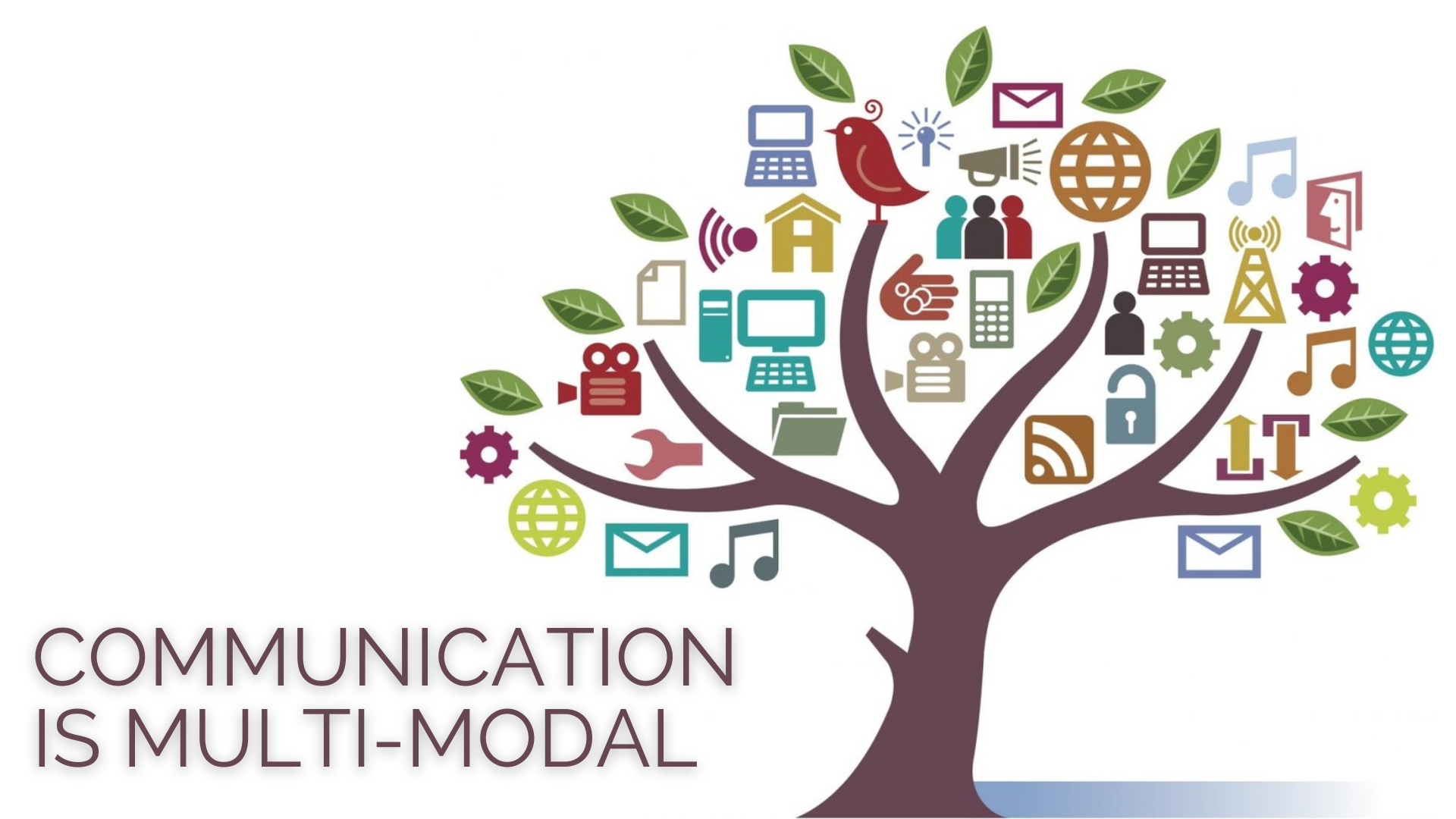 Language is one part of the first mode of communication which is verbal communication. Language includes everything from things like words, sentences, phrases, idioms, proverbs, and also includes actions like cursing and swearing, singing – basically, all the stuff people hear that comes out of your mouth that is part of a constructed system of communication. Words are a basic unit in languages, and the sounds we give to them have a shared meaning with all others who speak the same language. A second part of verbal communication is paralanguage.

Paralanguage focuses on the way something is said, rather than specifically what is said. Examples of this are rhythm, intonation, pitch, speed, tone of voice, volume, and voice inflection. The way you say something can indeed change its meaning. The specifics depend on the language and culture.

A third type of verbal communication is the verbal noises or utterances that people make. These are sounds, but they’re not words. The sounds, however, do communicate meaning, but they’re not considered part of formal language. Examples of these sounds include sneezes, coughs, throat clearing, sighs, hiccups, tsk’s, sh’s or hushes, moans and groans, yawns, yells and shouts, laughs, giggles, and hums.

Another category is the use of silence. Yes, silence, or lack of speech, can communicate quite a lot. Silence in human communication can refer to long or short hesitations, pauses, and breaks in speech.

Now most of what I’ve talked about in verbal communication can also be expressed in the written word. Written communication, then, is a second mode of human communication. It consists of different writing systems, such as alphabets, syllabaries such as hiragana and katakana, Cyrillic – the script of many Slavic languages, hieroglyphs, pictographs, ideographs, and logographs such as kanji. These systems also include numbers and other mathematical symbols. Written communication comes in many formats, such as books, serial publications, blog posts, websites, fliers, pamphlets, notices, bulletins, advertisements, etc. And people can write novels or other type of books – physical and online, in addition to articles, essays, research papers, reports, white papers, text messages, tweets, emails, etc.

Gestures are the first category, and they included movements of parts of the body, especially hands, arms, or the head, to express an idea or meaning. Here are some examples common to places where English is the main language spoken: thumbs up, thumbs down, OK sign, high five, waving, beckoning, shoulder shrug, the middle finger, nodding, shaking ones head, a little, big, tall. You get the idea.

Oculesics is the category of nonverbal communication concerned with eye movement, including the intensity, duration, and avoidance or eye-contact. Unsurprisingly, actions like staring, gazing, watching, looking, glancing, and spacing out are all important in oculesics.

Facial expressions are a bit like gestures but made only with the face. Facial expressions are not as easy to control as gestures since they often reveal feelings and are sometimes done subconsciously. They are made through tiny muscles throughout your face working together to deliver meaning. Examples are smiling, frowning, pouting, blinking, squinting, raising eyebrows, grinning, crying, and flaring nostrils. And of course, these actions in the face can be combined for more nuanced meaning.

Posture & movement is another type of nonverbal communication, but this body language does not focus on the face or head or arms so much as the whole body. Examples are stance (which is another word for posture). People lean, stand stiff, cross their arms, sit, squat, cross their legs, slouch, stand tall (or stand confidently), and fidget (such as when you shake your leg after drinking too much coffee or when you are nervous. Children fidget a lot). Some actions like clapping and some head movements might be considered as part of this category rather than gestures.

Proxemics is the category that studies people’s distance from one another when communicating and the degree to which people touch when they communicate. Examples of actions in this category include bowing, shaking hands, kissing, touching (or haptics – the study of touch), squeezing, patting, hugging, etc. The concept of personal space comes into this category. Personal space refers to social distances people feel comfortable with depending on relationships. This varies rather widely from culture to culture.

Of course, people communicate visually through their own person, too – your physical appearance and presentation. Your ethnicity, gender, age, body size, attractiveness, grooming, personal fashion, style, hairstyle, body art (like tattoos and piercings), jewelry, etc., whether you can control these things or not, are all types of visual information that communicate something to other people.

The takeaway (or the key point to remember) is that it’s impossible to become good at a foreign language like English without also learning a fair bit of the culture or cultures where it’s used. You’ll also be learning the paralanguage and vocalizations or utterances of English, as well as all the different categories of non-verbal communication that are so important in helping you effectively communicate.