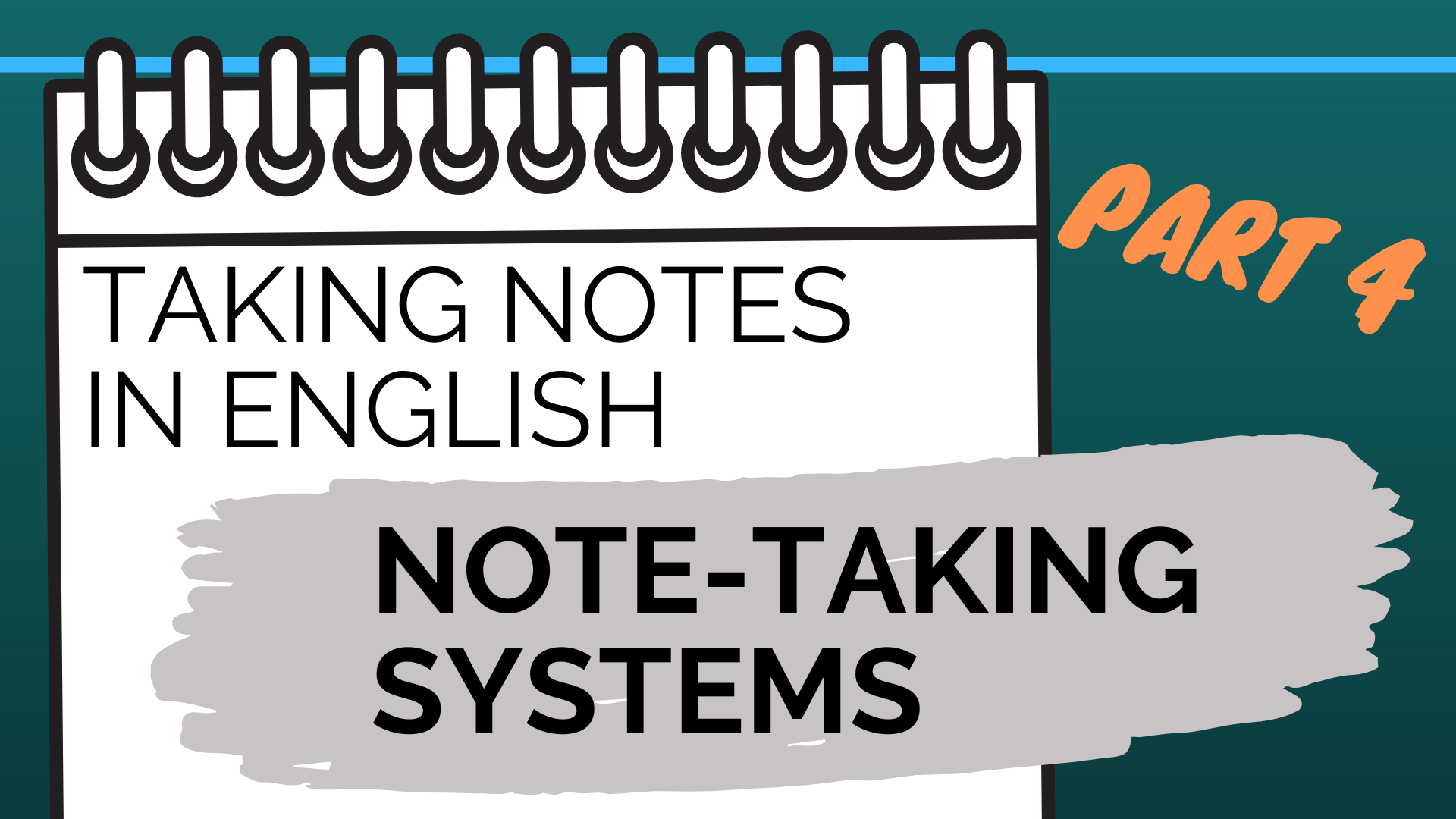 Welcome to part four on my series about taking notes from lectures that are given in English. We’ve covered what tools to use, and the verbal and non-verbal cues to pay attention to so that you know what is important to write. In this post, we’re going to talk about how to record your notes.

When you take notes from a lecture, it’s a good idea to use a note-taking system that’s been proven effective. In fact, there are many good systems available for you to use. Each system has pros and cons (good points and bad points). The system you decide to use will depend on your personal preferences. I’m only going to introduce four different systems that you can use – the outline method, the the mind mapping method, the box and bullet method, and the Cornell method.

The outline method is probably the simplest system. You just record the details of the lecture in a bullet list. Each main point is a top-level bullet, and underneath it you can indent further and further as you add more details, examples, and specific information.

The outline method looks a lot like an outline that you would prepare when you write an academic essay. It’s very clean-looking, organized, and easy to follow. There are several different top-level bullets or numbers followed by several levels of detail.

The outline method is great for creating well-organized notes. However, you might end up with notes that look the same when you return to review them. That’s why it’s important to format them so that important details stand out when you review them later. Make sure to use numbers, bullet points, and underlining consistently. Using a computer might be a good choice if you use the outline method. This is because you can easily insert information you may have missed – either during the lecture or after.

A second method you can use instead of the outline method is called mind-mapping. Mind mapping is a method used to brainstorm ideas when you are preparing an essay. But it’s also a way to take notes during a lecture. Mind maps are diagrams that visually show the relationships between individual concepts (or ideas) and facts. Just like the outline note-taking method, mind maps are very organized and hierarchical (meaning they have different levels). But that’s the only similarity.

Outline-style notes are linear, which means they progress in an order – from the top of the page to the bottom, like normal text. Mind maps, however, look more like trees or spider webs. To create a mind map, you write the main concept in the middle or concept in the middle of the page and then branch out into details. This method works really well on paper. However, there are many apps that you can use as well. In class, however, paper’s probably much faster.

The Box and Bullet Method

The box and bullet method is my third example of a note-taking method you can use, and it’s pretty simple. You draw a box for every main idea, and under each box your write supporting points that are written next to bullet points. I think it can look a bit like a Power Point presentation.

The last note-taking system is called the Cornell method, and it’s the method that I recommend most. It was developed by a Cornell University professor called Walter Pauk in the 1950s. He wrote about it in his book, “How to Study in College.” In the Cornell method, you divide your paper into three different sections – the cue column, the notes column, and the summary column. If you’re using a computer app, you can do the same thing in table you create in advance. During a lecture, take your actual notes in the notes column. You can use any method you want here, but it could be the outline method that I talked about first in this video.

As soon as possible, after class, in the cues section of your paper, you write questions you answered in your notes. This will be useful for you when you look at your notes later to review. Your questions will point you to the most important information and help you to organize your thinking.

The summary area is where you write your summary of the lecture. You should do this soon after the lecture is finished, too. Take two or three minutes to read your notes again, and also look at the questions you wrote down. Then, write a one or two-sentence summary of the most important ideas that were covered.

The reason you do this is to create an initial starting point for when you review your notes later. This helps you to make associations in your brain about everything that was presented. It also helps you understand and to keep what you have learned in your brain for longer.

What’s the best method? Well, it’s your decision. I would recommend trying all of them to see what you like. It’s possible that you might prefer to use one system for one class and a different system in another. This is because teachers have different teaching styles, and the content that is covered can be quite different.

Whatever system you chose, I do recommend that you revise your notes as soon as possible after class. Some people do this by writing out all their notes again, in longer sentences. Other people might simply add more information to them. It is important to look at them to make sure you can understand them, however. It would be terrible if you looked at your notes right before a test and realized that you cannot understand what you wrote! I’ll talk more about revising and reviewing in a later video.

So now you know a few systems for taking notes. Regardless of whether you chose the outline method, mind mapping, the box and bullet method, the Cornell method, or any other method, writing in English while you listen is very difficult, even for native speakers. So how can you do this faster? I’ll share with you some symbols and abbreviations you can use that will help you to take notes quickly in the next post.