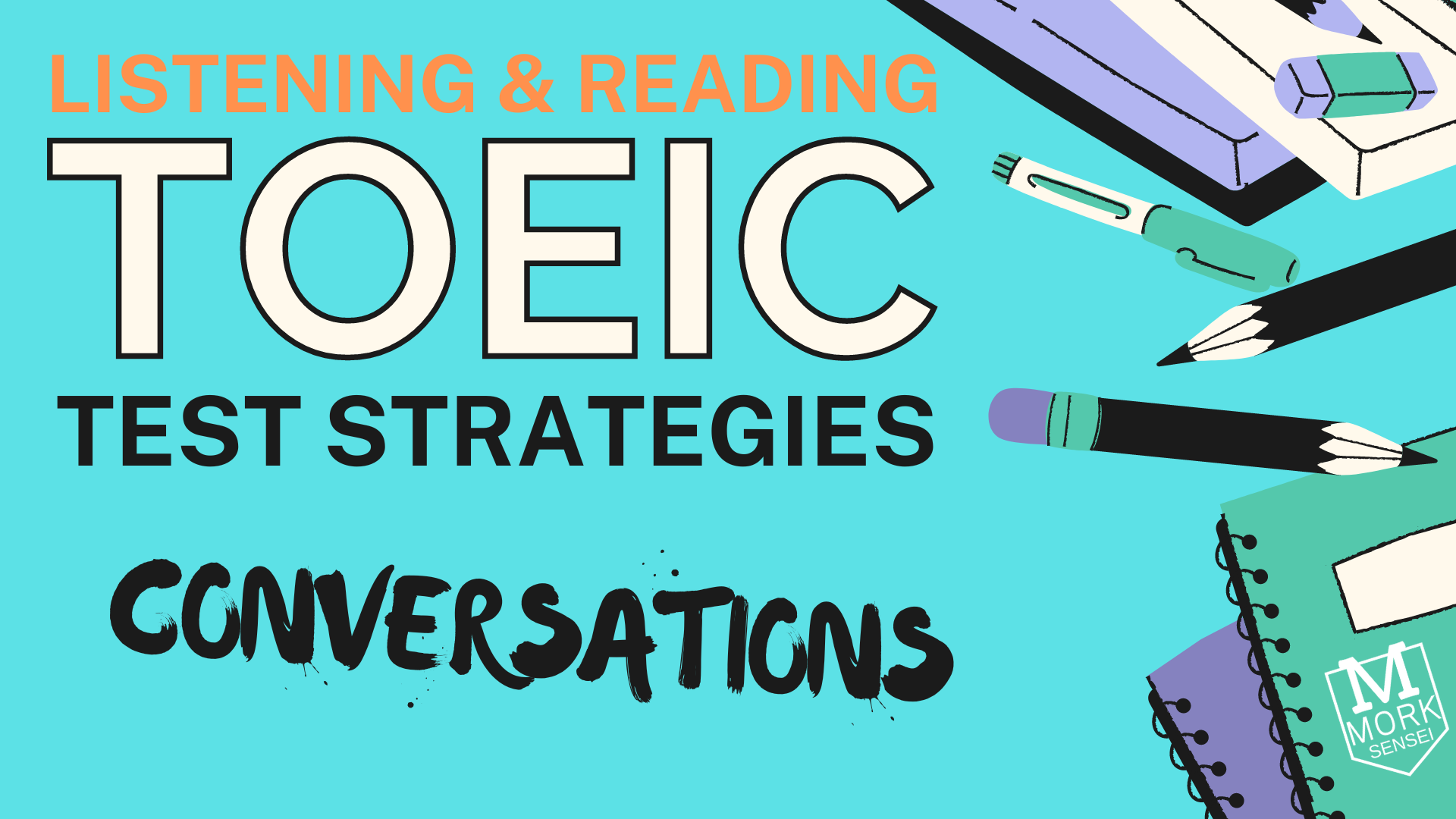 Welcome to Part 3 in my series about strategies to prepare, study, and practice for the TOEIC Listening and Reading test. This third part of the 45-minute-long listening section and it’s about conversations. In this part of the test, there are 39 questions about short conversations between a couple of people that are spoken only one time, and there is no printed script. You must listen to each conversation and read and listen to each of the three questions for each conversation printed in the test book, and you must choose the best response for the question and mark your answer on the answer sheet.

Just like in the previous sections, I have four main tips for the question-response section of this test. I’ll also throw in some bonus tactics.

1. Skim the answer choices to help you prepare for what you’re going to hear in the conversation.

The questions and answer choices in this part of the TOEIC test can help you to predict what you’re going to hear, so use the time available to you to skim through them before you listen. This will help you identify the key parts of the conversation and give you a rough idea of what’s coming. As you identify distractors, cross out those answer choices. When you do hear the correct answer choice, mark it quickly on your answer sheet and use your time to preview the next question.

“Why is the man calling the woman?”

“What are the speakers mainly talking about?”

“Who most likely is the woman?”

“Where most likely are the speakers?”

“Where is the conversation taking place?”

Common questions for the second question include asking for details. You’ll have to listen for key words to help you answer this question correctly. Examples:

“What is the problem?”

“What does the woman mean when she says, “I’m afraid not.”

“What does the man tell her?”

“What does the woman suggest?”

“How does the man feel about the new training program?”

“What does the woman ask the man about?”

The answer to the final question can usually be heard near the end of the conversation. Often, conversations end with speaker A suggesting or requesting speaker B to do something or telling him or her what to do next. In these cases, the last question asks information related to this.

“What does the woman ask the man to do?”

is an example. However, sometimes there are questions such as

“What most likely will the speakers do next?”

which require you to do some deductive reasoning, meaning you have to guess the most logical choice based on what you’ve heard.

Now let’s move to tip number 2, which is to be familiar with same-word distractors. Conversations in part 3 can often use words are the same or have similar meanings as words in the answer choices. This may cause you to choose an incorrect answer. Be careful not to choose an answer simply because you’ve heard something similar in the recording. In fact, if you hear the exact same word or phrase that is written as an answer choice, it may be a distractor, so be careful. Remember that the correct answer choice often uses different words to say the same thing in the recorded conversation.

Listen to who says what. The short conversations in Part 3 include female and male voices. Another way the test can distract you is to give you an answer choice that is associated with the wrong person. For example, a question might be, “What does the woman want to do?” and one of the answer choices might be “buy a red jacket.” However, it was the man in the conversation who wanted to buy the red jacket, not the woman. Keeping track of who said what will help you avoid distractors.

3. Use vocabulary cues to infer meaning.

Tip 3 is to use vocabulary cues to infer meaning. The answers to many questions in Part 3 of the TOEIC test are not stated directly. To do well, you must listen carefully and use your knowledge of related vocabulary and context to choose the correct answer choices. Just like all listening sections, you must listen for meaning, not particular words. For this reason, when you first look at the answer choices, try to think of other words or phrases that can be used in addition to or instead of them. For example, look this question and set of possible answers for a conversation you might hear. What are the speakers discussing?

Judging by the question, we can see that we are going to be asked about the key topic or main idea in the conversation. And as we read through each answer, we can prepare to hear possible ideas and words to do with the weather (such as sunny, cloudy, rainy, cold), a meeting (such as start time, number of people, location, participants), repair fees (such as price, renovation, upgrade, cost, timeframe, workers), or an office visit (such as transportation details, time, place, purpose of visit, etc.) Just keep your brain moving with associated vocabulary.

4. Become familiar with polite ways of saying “no.”

We’ve talked about taking time to read before the listening starts, becoming familiar with same-word distractors, and using vocabulary cues to infer meaning. Now let’s move on to the final tip, which is to become familiar with polite ways of saying “no.” Part 3 of the TOEIC test wants to check your familiarity with the language and organization common to negative responses. Most conversations in Part 3 start with a question or a request from one of the speakers. A common response to that question or request is to deny or refuse. Some common ways of refusing or denying include:

“I’m sure they wouldn’t allow it.”

You can identify these denials or refusals if you listen carefully to the information that follows them. The reason for refusing or denying is usually given by the speaker right after phrases like this. The information is often the focus of one of the questions. Indeed, it’s often the first question.

Listen to the end of the video below if you want an example in action of these 4 tips: skim the answer choices to help you predict what you’re going to hear, become familiar with same-word distractors, use vocabulary cues to infer meaning, and become familiar with polite ways of saying “no.” Best of luck to you in your TOEIC practice sessions. The more you practice, the less luck you’ll need during the actual test.