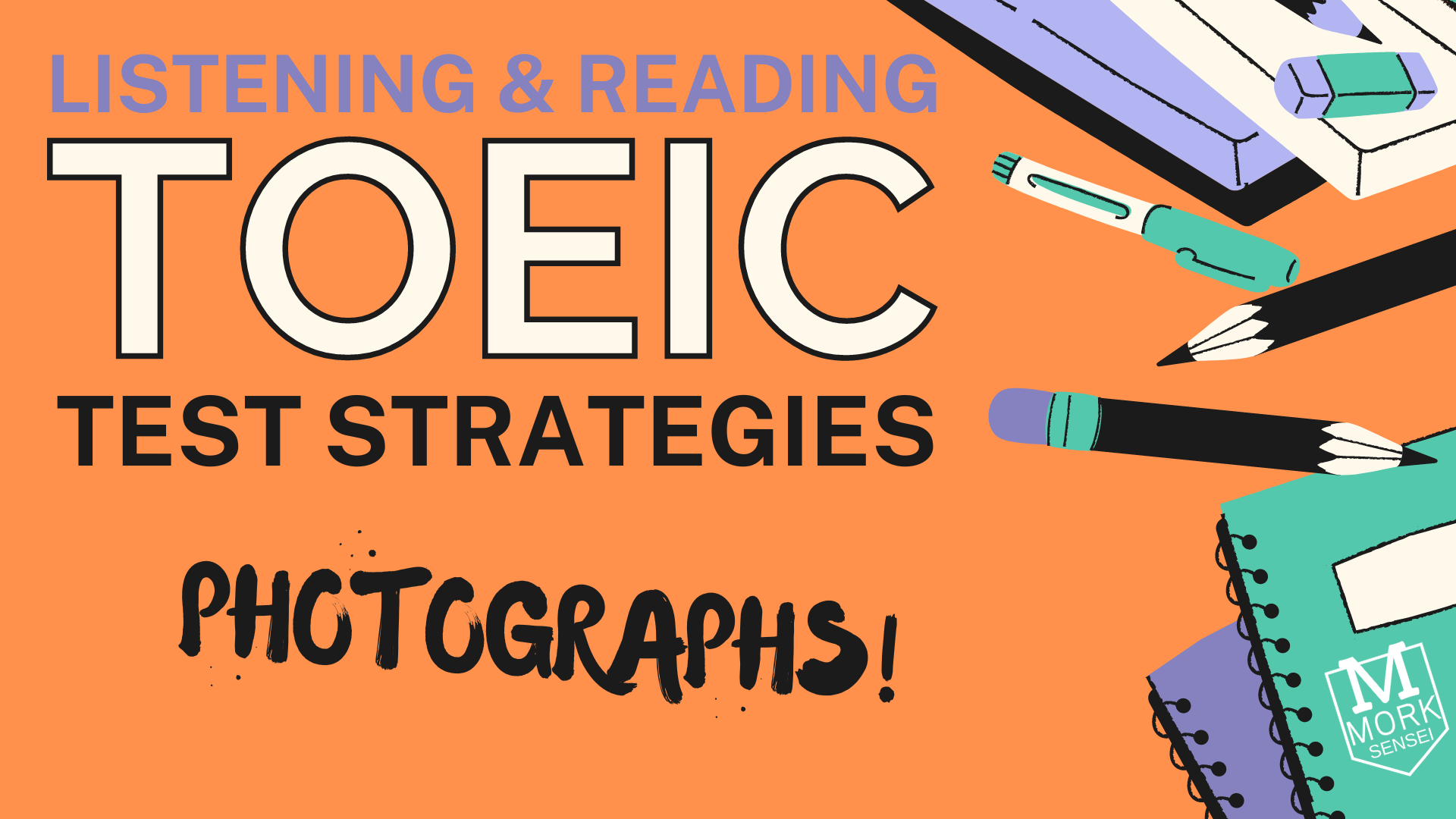 As I mentioned in an earlier post, the listening section of the TOEIC test is 45 minutes long and has 100 questions in total, divided into four categories or parts. In the first part, you will be presented with a total of six black and white photographs in your test booklet. While you look at each image, you will listen to four statements. Of course, you’ll not be able to read these statements; you will only hear them. You must choose the one statement that best matches the photograph. So here’s a quick example:

a) The young man is typing an essay.

b) The young man is holding a paper.

c) The young man is doing his homework.

d) The young man is writing an email.

– plus a few bonus tactics along the way!

My first strategy for the photograph section is to look at each photograph to predict what you will hear. You can see the photo before you start listening, so you should have time for your brain to process information. In the photographs section, most verbs are in the simple present or present continuous (or present progressive) tenses, and they are very short sentences. You should also know that most questions in this part of the TOEIC test are about one of three things: the activity, the general situation, and spatial relationships (so, phrases like next to, near, across from, etc.).

2. Listen for the correct nouns and verbs.

My second strategy for the photograph section is to listen for the correct nouns and verbs. Many of the distractors in the photograph section are incorrect because they use an inappropriate noun and verb for the situation. If you can identify the right vocabulary, you might be closer to making the correct choice. When you look at a photograph, the first thing you can do is start thinking of all the possible verbs that could be used to describe it. For example, in this photograph, what verbs can you think of? Try to think of as many as you can BEFORE the audio starts.

I thought of sit, relax, smile, hold (as in hold a cup), lean back (as in lean back against the wall), enjoy (as in enjoy a drink), put (as in put his foot on the table or put a cup on his knee). etc. Then try to think of as many nouns as you can. Again, in this example, we have man, woman, dog, cup, cold weather, and maybe boots, coffee? … hot chocolate? After you think of verbs and nouns, you can even make example sentences in you head. “They’re relaxing in cold weather… They’re holding cups… The dog is sitting on the woman’s lap…,” etc. All of this thinking should happen very quickly – in just seconds or less!

When you’re listening to check that the verb relates to the picture, echo (or repeat) the sentence silently as you listen and compare the verb used with what you see in the picture.

When you silently echo or repeat a sentence and you think it’s correct, keep your pencil on that answer choice. Don’t move it until you hear a better choice. Answer quickly and move onto the next question.

My third strategy for the photograph section is to listen carefully to every detail. Most incorrect choices in this part of the test will use some correct subject verb, and object words, and also some wrong ones. You need to be able to pick out the incorrect one and eliminate them. Most TOEIC Part 1 questions follow a subject-verb or subject-verb-object (SVO) sentence structure. Listen carefully for SVO words and compare the words you hear to what is in the photograph.

For example, in the photograph above, some possible statements are, “The man and the woman are holding hands,” “They are wearing backpacks,” “The couple is walking.” (It’s also possible to say the “couple are walking” by the way, but that is outside the scope of this video). Anyway, my main point here is that you need to be aware of these main patterns and also be careful of SVO (subject-verb-object) problems. Sometimes, part of the sentence is correct, but the rest of it is not. Back to this lovely photograph of the elderly couple here, “The man and the woman are wearing hats” is incorrect, and so is, “They are holding each others’ bags.” The object in both example is incorrect. “They are carrying backpacks” is also incorrect – wrong verb! So, you need to listen for distractors that contain the wrong subject, wrong verb, or wrong object. If any part is incorrect, you can safely ignore that answer choice.

My fourth strategy for the photograph section is to listen for the correct prepositions. A final common type of statements in Part 1 of the TOEIC Listening and Reading test is those that test your understanding of position and direction. Being familiar with words and phrases used to describe where things are and where they are going will definitely help you to do better on this part of the test. Prepositions are commonly used in English to talk about the position of people or animals or objects in photos. Do you know and can you use these typical prepositions? If you don’t, it’s time to review!

Beware of words that sound similar but have different meanings. Typical distractors in the listening section usually consist of these words – a type of homonym called homophones. For example:

Be careful of those words that sound similar! You might think that distractors like this are meant as a mean trick, but actually, you’re simply being tested to check if you can hear the difference.