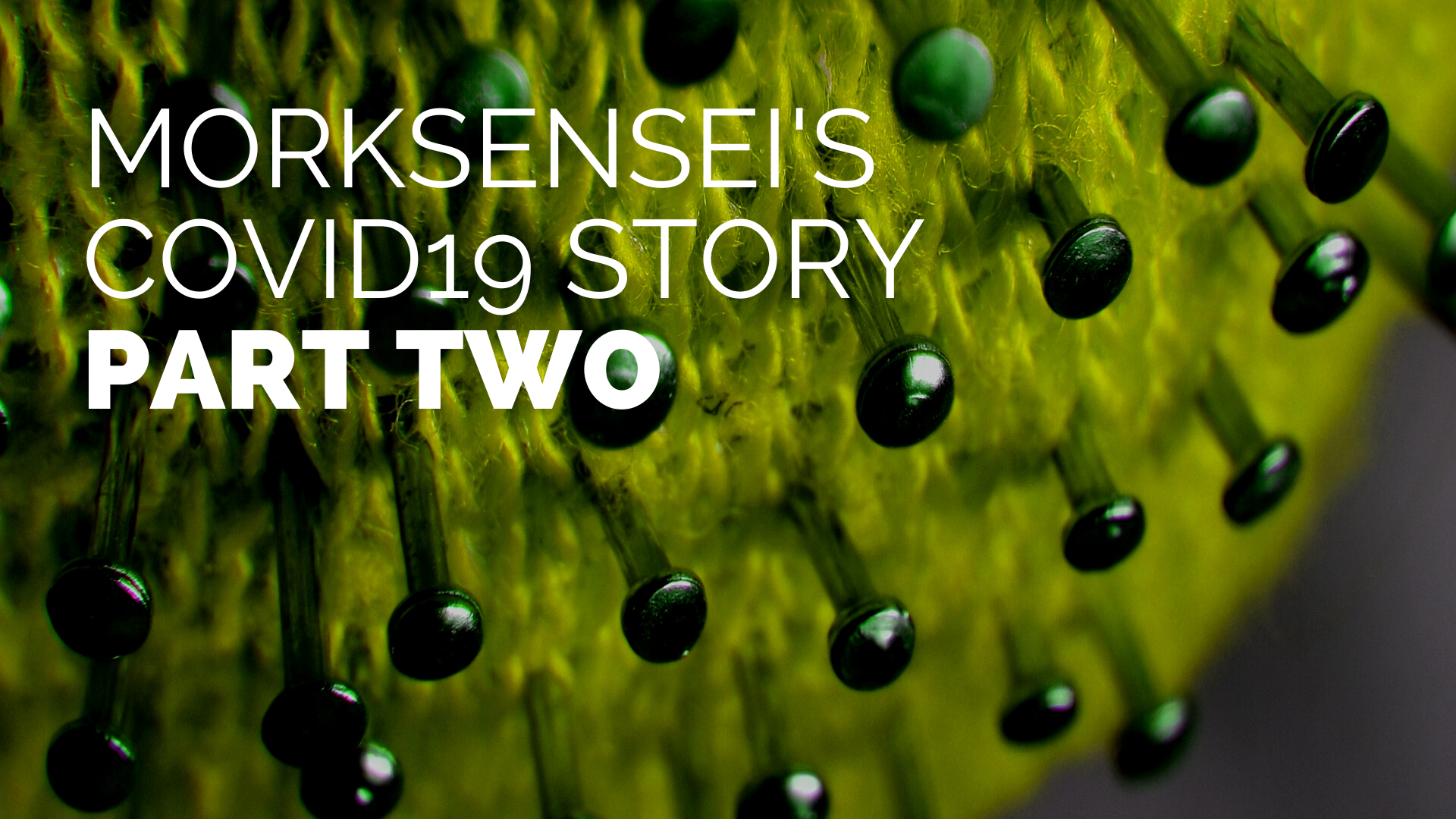 This is part 2 of my COVID19 story, which is about my stay in hospital and after getting out. Check out part one if first if you haven’t read it yet.

In addition to my high fever and the desire to separate me from people for public safety, I think my pre-existing conditions were a reason I had to go to hospital. A pre-existing condition is a health situation that makes you more vulnerable (or weak) to problems if you get sick. In my case, I’m older, I’m overweight, and most importantly, I have a long history of asthma and bronchitis. When I was a child, I had to carry a device called a ventilator to help me breath if I got an asthma attack.

Once I became an adult, I did not have problems with asthma. However, when I got a cold, it often would develop into bronchitis. Bronchitis is inflammation of the mucous membrane in the bronchial tubes. It’s horrible! Thankfully, my COVID19 chest symptoms never got as bad as bronchitis. However, I did experience coughing and sputum (sputum is that stuff that you cough up. You’re supposed to spit it out, but I swallowed it most of the time). I also experienced very loud wheezing. Wheezing means breathing with a whistling or rattling sound in the chest. This is something I get when I have bronchitis, too, but in the case of COVID, it actually didn’t hurt as much.

While in hospital I noticed that my lung capacity was decreasing. My second chest x-ray showed that my lungs were, in fact, heavily infected with the virus. I was given anti-inflammatory steroids, which I was not happy about, but probably helped me avoid getting worse. Anti-inflammatory steroids are a type of organic compound that reduce inflammation. Inflammation is a localized physical condition in which part of the body becomes red, swollen, hot, and often painful, especially as a reaction to injury, or in my case, infection.

Steroids can have bad side effects, which is why I didn’t want them, but of course the steroids helped prevent my condition from worsening, so I took them. The doctors watched me carefully. They were concerned about pneumonia, but thankfully I did not develop pneumonia. Pneumonia is a lung inflammation caused by a bacterial or a viral infection (like coronavirus), in which the air sacs (little bags in your lungs filled with pus that may become solid). Pus is that disgusting stuff that you find in pimples or zits. Pneumonia can be deadly. Yes, you can die from it.

After being in hospital for about a week, RNA sequencing results from the lab came back about the virus that had moved into my body. RNA sequencing is used to determine the structure of the virus. It turned out for me (or it was discovered) that I had the ALPHA strain of the virus, which is a version of coronavirus that is a little more contagious (meaning you can catch it more easily) and dangerous than the original strain (or type). As is common to many people with different strains (or different types) of COVID19, I lost my ability to taste and smell – for about five days in my case. I had little to no appetite for the first two weeks as well.

Looking back, I am very glad that I was in the hospital. I would not have been able to look after myself while I was feeling so bad, and the nurses checked on me regularly, giving me food and medicine, and making sure I consumed everything. Three times each day I had to take my own temperature, blood pressure, and oxygen levels. I had to check off my symptoms form a list and write down what percentage of the food I ate. I would never have done that by myself at home.

I think day eleven was my worst day. I remember having strange nightmares (or bad dreams), also night sweats, and some insomnia (or an inability to sleep). After that, though, I started to get better. During my last three days in hospital, I did not take any medication, except for some Chinese medicine, for constipation. Constipation means an inability to go to the toilet. Not “no. 1” which is liquid, but rather “no. 2” – you know, the brown stuff!  As I told you earlier, I’m vegetarian, so I am used to eating a lot of fruit and vegetables, which have a lot of fibre. However, the hospital food had very little fibre. As a result, I was not able to go to the toilet for six days.

However, the Chinese medicine – the KANPO – the constipation medicine – ah, it took a long time to work, but by the time it did work, I developed a bad case of diarrhea. Ugh! So, diarrhea is where your “no. 2” s are liquid or close to liquid. This situation was accompanied by nausea. Nausea is the condition when you feel like you want to throw up (or vomit), and I also had a bit of a fever. In fact, the day before I was scheduled to leave the hospital, I had a fever. I was worried that they would not let me escape. Thankfully, I was OK the next morning.

The last three days in hospital were tough for me because I was no longer so sick and therefore, I became really bored. The staff had to make sure I was OK without medicine. Since I only had my smartphone with me, I had become very tired of simply consuming digital content. I listened to podcasts, audiobooks, watched Netflix and YouTube, and I also did a lot of online window shopping, in addition to social media. But I was excited to produce or do something – even something mundane (or boring) like clean my apartment, go shopping, or write on my blog. But I couldn’t do any of that.

On Thursday afternoon, day fifteen of my stay in hospital, I was finally allowed to escape. My only remaining symptoms at that time were extreme fatigue (or tiredness) and reduced lung function.

I was very emotional when I thanked the nurses and drove away from hospital. I was so happy to have beaten COVID and be able to go home. However, before going home I had to get gas for my car and go grocery shopping because I had no food at home. Although these were very simple tasks, they completely exhausted me.

Over the next 2 days I was so excited to be active again. I moved very slowly, but I went out again to do some basic errands, like banking, shopping, etc. Again, I was so tired during my errands, that I had to lean against walls or sit down wherever possible. I was happy to be doing something, though.

The next few days, however, I did not do so well. I was planning to make a video for you earlier, but I developed a low-grade fever. Low-grade means not too high, but high enough to make you feel unwell. I developed insomnia (an inability to sleep – which I also suffered from in hospital), as well as itchy skin. I developed rashes on my legs, arms, and chest.

So, I went back to the hospital, and was given more medicine for my skin. My skin situation, as expected, was a reaction to the anti-inflammatory steroid medication I was taking. Yeah. I’m still suffering from a lack of energy and shortness of breath when I move to fast. I’m getting stronger every day, though.

My case of COVID19 was actually mild to moderate. With COVID19, we often think of levels ranging from asymptomatic (meaning you show no symptoms) to mild, to moderate, and then severe (severe means you’ll probably need oxygen or IV) and then finally to critical (which is where you have to be monitored all the time and you’re in a very dangerous situation).

I was lucky and am very grateful for the kind and good quality care (minus the food) that I got in the hospital. There are so many people in other places in the world who are or have been in far worse condition than I, but who cannot or could not get adequate (or enough) health care. So, I feel very privileged, which means I feel I have advantages that others don’t have.

Ironically, I received the government invitation for my vaccination in my mailbox when I returned from hospital. Great timing, eh? I’ll get my first vaccination shot in early August. Better late than never!

And now it is already the end of the semester at school. I did not get a chance to finish classes with my students, whom I miss, and I’m very much indebted to a couple of faculty members who took over my classes. “Indebted” means owing gratitude for a service or favour.

Obviously, following all the rules gives you know guarantees with coronavirus, but I still believe in following the rules, and I hope you do, too. Protect yourself and others by washing your hands often, keeping your mask on, and socially distancing. This virus is mutating (or changing) and getting more dangerous; we now have many different strains, like the very contagious DELTA, which has quite a bite, so stay safe!