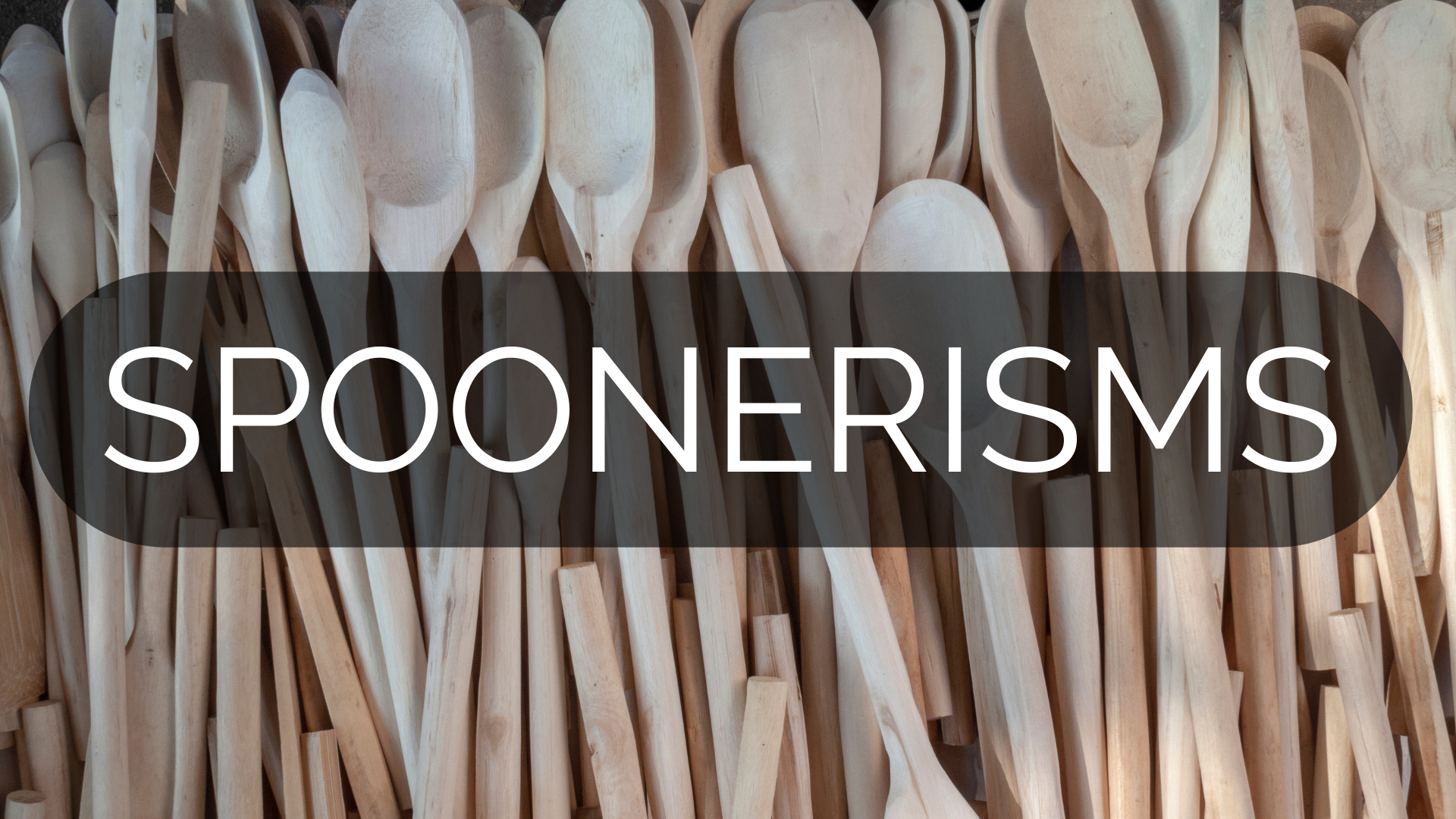 We’ve talked about eggcorns, malapropisms, and mondegreens so far in the series, so now it’s time for spoonerisms. A spoonerism is a speech phenomenon in which the initial parts of a group of words that commonly go together are transposed (or swapped or mixed up). This usually happens accidentally, and like many of the other linguistic mistakes we have covered, can be quite funny. The resulting phrase is often made up of words that really do exist, making it all the more amusing.

To give you some examples right away, some commonly cited examples of are blushing crow rather than crushing blow or fighting a liar in place of lighting a fire, or keys and parrots instead of peas and carrots.

The word spoonerism has nothing to do with spoons. The term is named after British clergyman and educator William Archibald Spooner, who lived from 1844 to 1930. Apparently, Spooner made so many mistakes that we now call spoonerisms during his orations (or lectures) that even while he was still alive, the term came into popular usage. A couple of cute mistakes he made was saying something was “a fit little bunny” instead of “a little bit funny” and saying something was “a blushing crow” instead of “a crushing blow”. Those is funny, but apparently Spooner did not think it was funny that the term spoonerism was named after him. He would be “grolling over in his rave” if he learned of how much fun we have with spoonerisms today. (“rolling over in your grave” means to be angry even though you are dead.)

As it happens when you swap (or exchange) sounds between a couple of words in a phrase, a spoonerism is an interesting kind of mix-up. There are unintentional spoonerisms that don’t make sense, such as “goys and birls” instead of “boys and girls”. There are also spoonerisms that create new and funny meanings such as “better Nate than lever” rather than “better late than never.” You can also have what I have personally coined (or named) a double spoonerism. I don’t know if I am the first to think of this term, but I like it. For example, you could say for “dalk the wog” for “walk the dog,” but I have often caught myself saying “wog the dalk”! That’s a double switch!

You can also use spoonerisms intentionally (or on purpose). One reason I personally do this is so that I can swear without sounding like I’m swearing. I often say “fluster cuck” instead of “cluster f&%$” or “nucking futs” instead of “f&%$king nuts” or “no wucking forries” Instead of “no f&%$ing worries” or “biserable mastered” instead of “miserable bastard” (that last one is less offensive to me).

Spoonerisms are also used intentionally for literary or comedic effect. There’s a book called “Stoopnagle’s Tale Is Twisted: Spoonerisms Run Amok” by Keen James that retells fairy tales using spoonerisms. Chapters include “Beeping Sleuty” (for Sleeping Beauty) and “Prinderella and the Since” (Cinderella and the Prince). Another book called “The Rails I Tote” (The Tales I Wrote?) by Christopher Manson has 45 spoonerism cartoons for readers to enjoy trying to decipher (or figure out), such as “bee tags” for “tea bags”. Yet another book called “Runny Babbit: A Billy Sook,” (Bunny Rabbit: A Silly Book) by Shel Silverstein appears to relish (or enjoy) spoonerisms.

A comedy skit called “Rindercella” (as opposed to Cinderella) appeared on the TV show “HeeHaw” many years ago: “Now the storal of the mory is this: If you ever go to a bancy fall, and you want a prandsome hince to lall in fove with you, don’t forget to slop your dripper.” If you like dirty humor without saying anything dirty, check out a stand-up comedy version of “Rindercella” by Wayne Flemming

Would you like some examples of spoonerisms? Check the video below for some more.

Cognitive psychologists like to study phenomena like spoonerisms because of what they say about how our brains construct language. Early twentieth-century psychologists believed that language was produced in our brains one word at a time. They thought that each word acted as a stimulus to produce another word. But now experts believe, through study of our spoonerisms, that we produce language in clumps (or chunks) rather than one word at a time.

Spoonerisms are actually not random mistakes; they follow a set of rules. When two sounds are transposed (or switched) between two words, they tend to always be sounds that belong in the same positions. For example, the beginning of one word almost never exchanges with the end of another. The close association your brain makes between two words such as “dog” and “house” indicates that your brain chose those words together as a unit, rather than one at a time.

Why do we make spoonerisms, then? It’s because as we construct language, our brain builds a frame for what we are going to say before we choose the actual words that will go into that frame.

When we say a phrase correctly, it’s because our brain was able to create the frame and the sounds of the words that go into the frame at the same time. When we’re not successful at coordinating the frame and the words, spoonerisms happen. Often this breakdown might be the result of an external or internal stimulus that interferes. Maybe you’re distracted, or maybe you’re simply tired.

However, be careful: mixing up words often isn’t always a laughing matter. It could also be one of the early warning signs of Alzheimer’s disease.

But it’s true that we all mix up words. Chances are you have made a spoonerism in your own language. And if you have ever made one in English, congratulations! Perhaps that means you are chunking your language now instead of thinking about each word you want to say individually in English. This is a good sign of increased fluency!

Like eggcorns, malapropisms, and mondegreens, spoonerisms are cases where you get the words wrong, but they are different from each other. So here is a summary for review.

I hope you’ve enjoyed the last four post about linguistic slips that native English speakers make. Hopefully you will be able to avoid some of them now. But take heart (or don’t worry) if you still make mistakes, because native speakers of English make them, too.