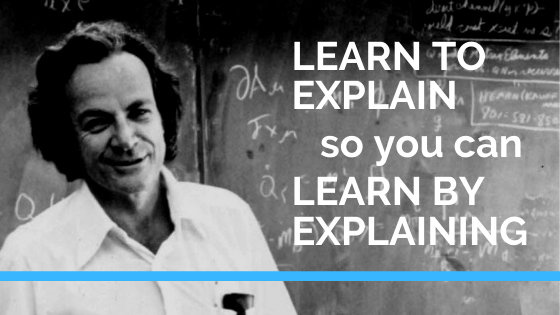 Einstein was thought to have said, “if you can’t explain it simply, then you don’t know it well enough.” If you flip this quote around, you get a very powerful study tool: “If you want to learn something well, explain it to someone.” I touched on this in my post on how to Study Less Study Smart (based on a lecture by Dr. Marty Lobdell).

Since teaching what you’re trying to learn is such a powerful study technique, the process of doing it is worth exploring (or going into more detail about). The process of explaining what you’re learning is called the Feynman technique, and it’s named after a top theoretical physicist called Richard Feynman.

Now Dr. Feynman received a Nobel Prize for his work in quantum electrodynamics. (Please don’t ask me to explain that!) Feynman was so good at explaining difficult concepts with simply language that he also became well known as an excellent teacher. To test whether or not his workmates understood the concepts he explained, he would get them to explain them back to him in their own simple language. He believed that if they could do this, then indeed, they had understood well.

The Feynman learning technique has been proven an effective method for learning something new or deepening your understanding of what you already know. You’ll be learning to think critically about information, and apply your knowledge. Obviously, you’ll also get better at teaching, and you’ll be better able to study for an exam. And it also works no matter what topic you’re trying to learn, and that includes the English language, or anything you’re studying through English!

How do you do it? Well, there are four steps.

The first step is to pick a topic you want to understand and start studying it. Once you think you know what it’s about, take a piece of paper and write the topic at the top of the page.

The next step is to write about it in your own simple English, as if you’re teaching the idea to somebody else. You’ll need to write simple definitions, but writing examples will make your explanation stronger. You need to show that you can use or apply the concept as well. Ideally, you should write and speak at the same time, just as a teacher does on the blackboard. This will make you realize which part or parts you understand and where you still have gaps in understanding.

So, the third step is to go back to your notes or study materials to review when identify problem areas, or feel lost, or lack confidence in being able to write down your explanation. Problem areas can occur at any time during the process, so you may have to do this step many times. No problem, this is part of your learning process! Also, don’t look at sources and write at the same time because you might be tempted to mindlessly copy what you’re looking at without a full understanding.

The fourth step is to repeat what you just did, but this time simplify your language or use a graphic analogy or visual (like a poster or pictures) to make any important points or examples. If your explanation is too wordy or confusing, you probably haven’t understood it well enough, so it’s best to start over again. Remember, simplicity is the goal.

You can use this technique when learning new words in English. Look up a word you need or want to know in a few dictionaries, study its meaning and use, and then write and explain it to a friend or even to yourself. Don’t forget to create your own example sentences of the word, remembering that it can probably be used in different ways or have different meanings. Keep doing this until you feel confident you have a deep understanding of its meaning and how to use it.

I find it helpful to imagine that the people who are listening to you explain are just children; kids aren’t stupid, but they may not have the base knowledge, experience, assumptions, and vocabulary that you do. If children can understand you, then it proves that not only are you a good teacher, but more importantly for you, that you also know the content well! In fact, if there is a younger person in your family, try this technique with them. Kids are great because they’ll keep asking “why? why? why?” until they get a satisfactory answer. If you get a lot of “why’s” you’ll have to prepare more or better explanations or examples.

Thinking about an idea by explaining it is a very effective learning method. Going through the process helps you confirm what you know and remind you what you don’t yet know. When done correctly, it’s efficient and helps you waste less time in the long run. It will take time in the short term, however, and does require a lot of your effort. But once you can explain an idea in simple language, you’ve probably understood it deeply, and will remember it for a long time.

Have you ever used this technique to help you learn? Something similar to it? Why not try explaining the Feynman technique in English to someone you think could benefit from it?