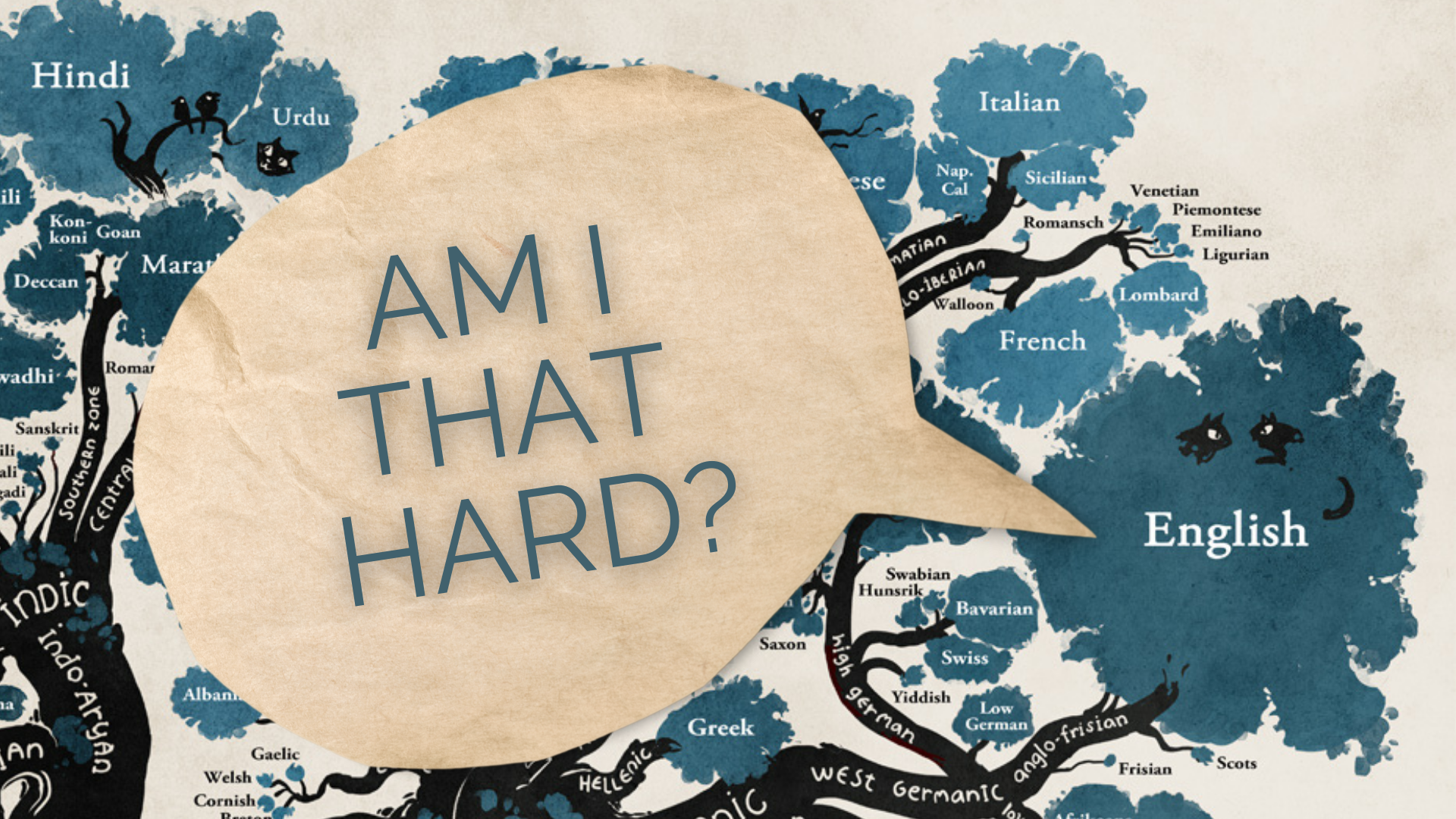 Learning any foreign language takes time and regular effort. However, it is also true that how difficult it is to learn depends on your what your native language is. This is because of the different degrees of difference between languages. No language is impossible to learn, but it’s true that some languages take a lot more time to learn than others. How difficult is English for you? That depends. What’s your native language?

Hello, lovely English language learners. It’s Morksensei. Did you know that currently there are over 7000 languages spoken in the world today? 7139, last I checked. This number is always changing because we’re learning more about the world’s languages all the time. Despite the high number, only 23 languages are spoken by half of the entire world population. Two thirds of all languages are included in the top six language families.

If your language is also from the Germanic language family – such as Dutch, German, or one of the Scandinavian languages, then you will have less difficulty learning English. And if your native language is on part of the Indo-European family at all, but instead a whole different family tree such as the Sino-Tibetan language family tree, then English is going to take a lot more effort for you, because it’s so different.

Here in Japan, I am often told by local people that learning English is very difficult. Judging by the small proportion of people who do speak it well, it would seem that they’re right. The same is true for my case when learning Japanese. When I was much younger, I spent a year in Central America. After about only six months of studying Spanish, I was able to read a Spanish-language newspaper – mostly. This is because the romance languages (French, Italian, Spanish, Portuguese, Romanian, and more) are part of the main European branch of the Indo-European language family tree, and because I already had a solid understanding of French before I started learning Spanish. However, this was not my experience learning Japanese. After six years studying Japanese, I was still barely able to read a children’s book.

Does it take so long for English and Japanese speakers to learn each other’s languages because they’re difficult? No. I think most languages are each challenging in their own way. However, the reason one language may feel more difficult and take more time to learn, is simply because they have very little in common. They’re so different from one another.

Not only are the languages different, but the cultures they belong to can be very different as well. For example, many cultures worldwide have different social levels or hierarchies in society. When we talk to certain people in society, such as leaders or the elderly, we use more polite and formal language than when we talk with our friends and family. Traditional Japanese culture is very hierarchical and shows degrees of politeness by using different levels of language – something called 敬語 (keigo) (and 尊敬語 (sonkeigo) honorific language). To people from very different cultures, this can seem like a second, completely different Japanese. It’s challenging because the very idea of keigo may not exist in their language.

Many words in the English language developed from Latin and Ancient Greek words. For example, the word ‘restaurant’ comes from the Latin restaurare which means renew. Restaurant in French is restaurant, in Italian it’s ristorante, and in German it’s restaurant. The spelling and pronunciation are a little different, but you can see how similar they are, right?

In Japanese, there is a word, レストラン, which sounds similar, but that is because it’s a loan word. It’s borrowed from English because the word did not originally exist in Japanese. Original Japanese words for places to eat out include examples like 居酒屋 (izakaya) or 寿司屋 (sushiya) or うどん屋 (udonya) which are more specialized in what they offer. Everything about these words is very different for people who speak European languages. The words refer to specific Japanese cuisine with which many  people may not be familiar.

So, how long will it take you to learn English based on your native tongue? A couple of years ago, I posted about the time it takes to learn English, and as there are so many factors involved, I couldn’t give an exact answer. However, you might be interested to know that the Foreign Service Institute (FSI) in the United States has created a list to show the approximate time you need to learn a specific language as a native English speaker.

The list divides languages into categories. Category 1 languages are similar to English and take the least amount of time. Category 2 and 3 include a few languages which take a little more time. Category 4 is the biggest groups of languages, and category 5 languages are the most different and take the most amount of time. If you identified your own native language group in the list, then you’ll have good estimate about how different English is from your language and how much time it might take you to learn it.

Learning a new language is going to be hard work no matter what language it is, but I’m afraid it’s true – if the language or languages you already know are very different from English, it’ll take more time to learn. The good news is that it’s not impossible. And it will be well worth it, because English is the most widely used language in the world. And if you learn English, you’ll have an easier time learning similar languages, too.